Are you looking for the best Irish jokes? Well, you have come to the right place! Not only here on this page but we have a whole category dedicated to Irish jokes. They throw some of the best parties and gatherings, and if you’re friends with them, you can be sure that there’s no dull moment with them. 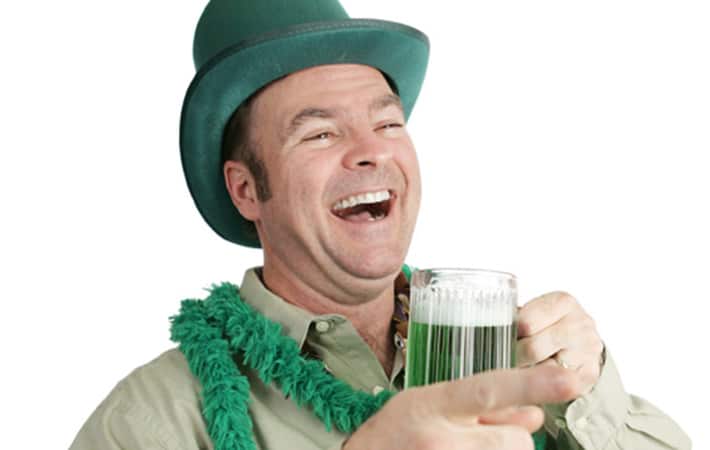 The Irish are also known for their sense of humour, which is why it isn’t surprising that some of the best jokes on the Internet are either made by them or about them.

Here are some of the best Irish jokes to tickle your funny bones. For more Irish jokes see our new Facebook page here

Check Out These Irish Jokes

One night, Mrs McMillen answers the door to see her husband’s best friend, Paddy, standing on the doorstep.

“Hello Paddy, but where is my husband? He went with you to the beer factory.”

Paddy shook his head. “Ah Mrs McMillen, there was a terrible accident at the beer factory, your husband fell into a vat of Guinness Stout and drowned.”

Mrs McMillen starts crying. “Oh don’t tell me that, did he at least go quickly?”

Paddy shakes his head. “Not really – he got out three times to pee!”

An Irishman was flustered not being able to find a parking space in a large mall’s parking lot.

“Lord,” he prayed, “I can’t stand this. If you open space up for me, I swear I’ll give up drinking me whisky, and I promise to go to church every Sunday.”

Suddenly, the clouds parted, and the sun shone on an empty parking spot. Without hesitation, the man said, “Never mind, I found one.”

Two paddies were working for the city public works department. One would dig a hole, and the other would follow behind him and fill the hole in. They worked up one side of the street, then down the other, then moved on to the next street, working all day furiously without rest, one man digging a hole, the other filling it in again.

An onlooker was amazed at their hard work, but couldn’t understand what they were doing. So he asked the hole digger, “I’m impressed by the effort you two are putting into your work, but I don’t get it – why do you dig a hole, only to have your partner follow behind and fill it up again?”

The hole digger wiped his brow and sighed, “Well, I suppose it probably looks odd because we’re normally a three-person team. But today the lad who plants the trees called in sick.'”

Paddy and Mick are walking down the road, and Paddy’s got a bag of doughnuts in his hand.
Paddy says to Mick, “If you can guess how many doughnuts are in my bag, you can have them both.”

A Texan walks into a pub in Ireland and clears his voice to the crowd of drinkers. He says, “I hear you Irish are a bunch of hard drinkers. I’ll give $500 American dollars to anybody in here who can drink 10 pints of Guinness back-to-back.”

The room is quiet, and no one takes up the Texan’s offer. One man even leaves. Thirty minutes later the same gentleman who left shows back up and taps the Texan on the shoulder. “Is your bet still good?” asks the Irishman.

The Texan says yes and asks the bartender to line up 10 pints of Guinness. Immediately the Irishman tears into all 10 of the pint glasses drinking them all back-to-back. The other pub patrons cheer as the Texan sits in amazement.

The Texan gives the Irishman the $500 and says, “If ya don’t mind me askin’, where did you go for that 30 minutes you were gone?”

The Irishman replies, “Oh…I had to go to the pub down the street to see if I could do it first”.

An Irish priest is driving down to New York and gets stopped for speeding in Connecticut. The state trooper smells alcohol on the priest’s breath and then sees an empty wine bottle on the floor of the car.

He says, “Sir, have you been drinking?”

The trooper says, “Then why do I smell wine?”

The priest looks at the bottle and says, “Good Lord! He’s done it again!”

Gallagher opened the morning newspaper and was dumbfounded to read in the obituary column that he had died. He quickly phoned his best friend Finney.

“Did you see the paper?” asked Gallagher. “They say I died!!”

Father Murphy walks into a pub in Donegal, and says to the first man he meets, “Do you want to go to heaven?”

The priest said, “Then stand over there against the wall.” Then the priest asked the second man, “Do you want to go to heaven?”

“Certainly, Father,” was the man’s reply.

“Then stand over there against the wall,” said the priest. Then Father Murphy walked up to O’Toole and said, “Do you want to go to heaven?”

The priest said, “I don’t believe this. You mean to tell me that when you die you don’t want to go to heaven?”

O’Toole said, “Oh, when I die, yes. I thought you were getting a group together to go on a trip right now.”