The Irish harp has been an article I have been looking forward to writing on my list of ancient Celtic symbols.

The national emblem of Ireland, the Harp is one of today’s most widely recognised Irish symbols apart from the Shamrock.

Every time I do one of these articles I see 100’s of tattoo ideas but the Irish harp is by far one of the most popular.

But what is the history behind the Irish harp? Let’s get into it. 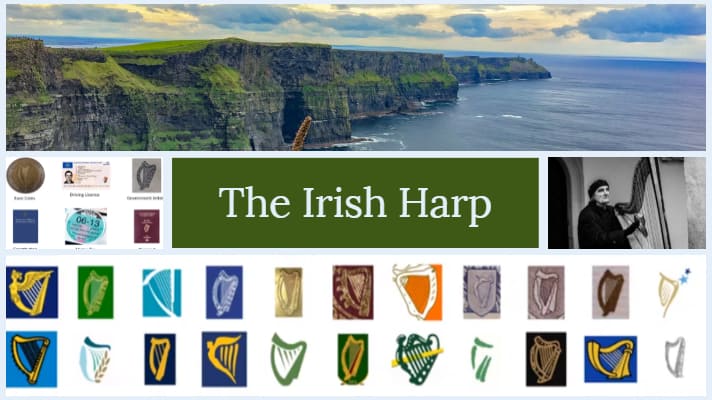 When I mentioned earlier that the Irish harp was one of the most recognised Irish symbols I wasn’t joking.

You can find the Irish harp on:

Some things you might not know about the Irish harp:

Guinness and the Irish Harp symbol

I was going to include this in the above points but found it quite fascinating.

Guinness had trademarked the harp symbol in 1876, and the Irish free state government of 1922 wanted to use the symbol they had to turn the harp the other way round.

This was to differ between the Guinness harp and the official state emblem.

If you look at any Guinness can today you will be amazed to see the exact same symbol that they used all the way back in 1876!

So there is no confusion the Irish harp was the symbol of Guinness since 1862 but only trademarked in 1876. 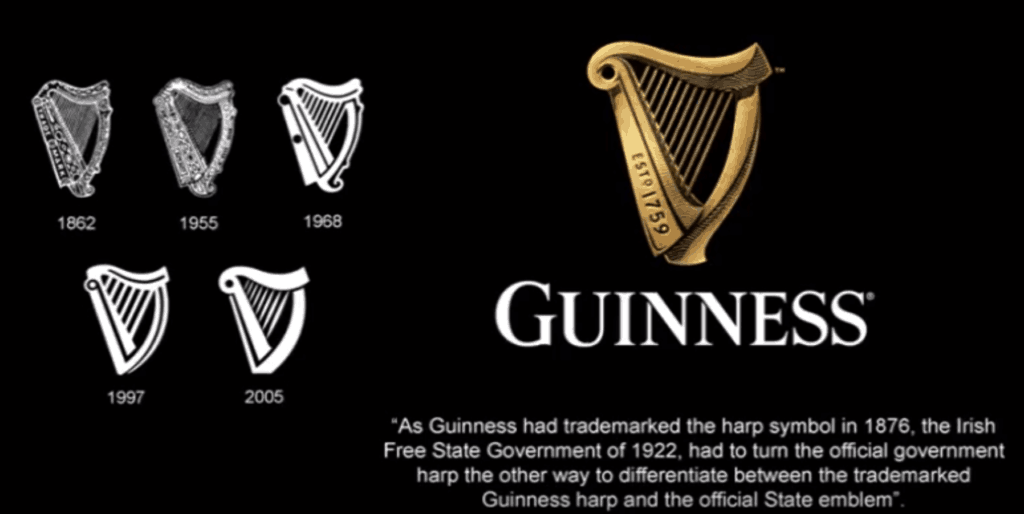 You will also see from the following picture that the symbol of the harp was not standardized over the years. 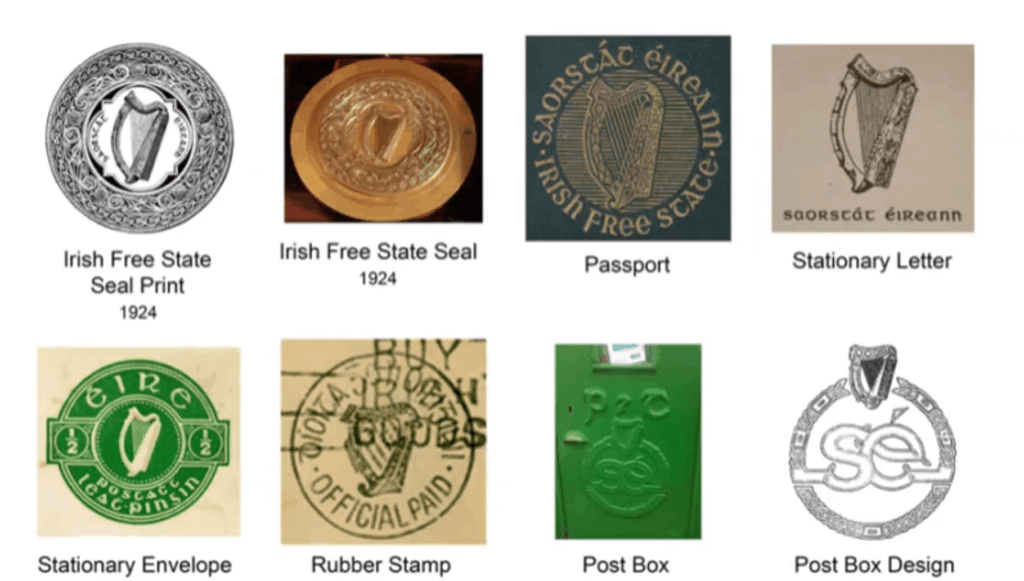 Other places you will find the Irish harp:

As I mentioned earlier, the harp symbol is everywhere. Below are a few examples. I also have linked all sources for this article at the end. 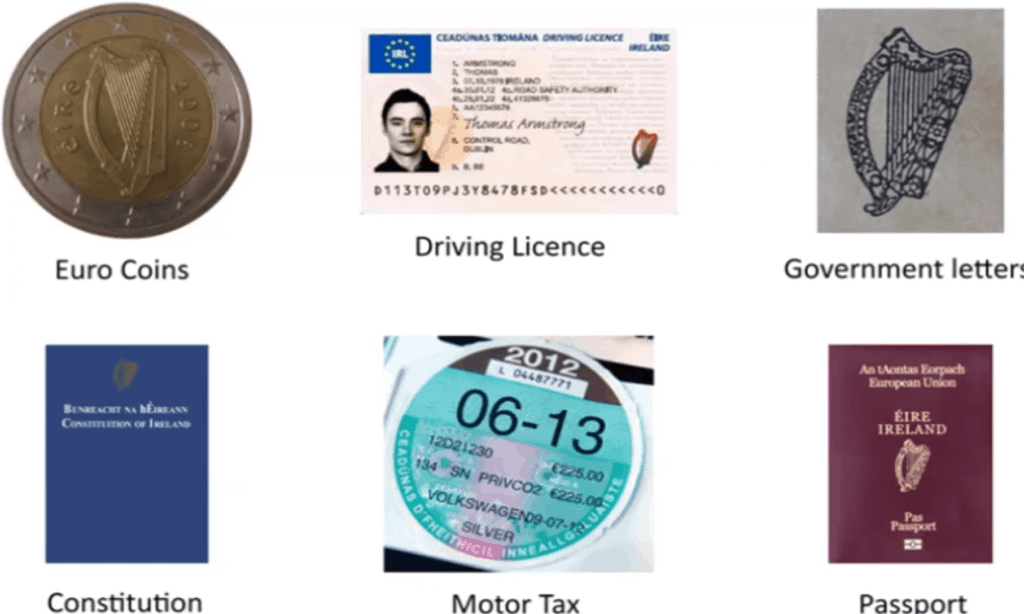 I really enjoyed the image below which is a combination of many Irish societies, Irish governments and Irish companies. How many do you recognize? 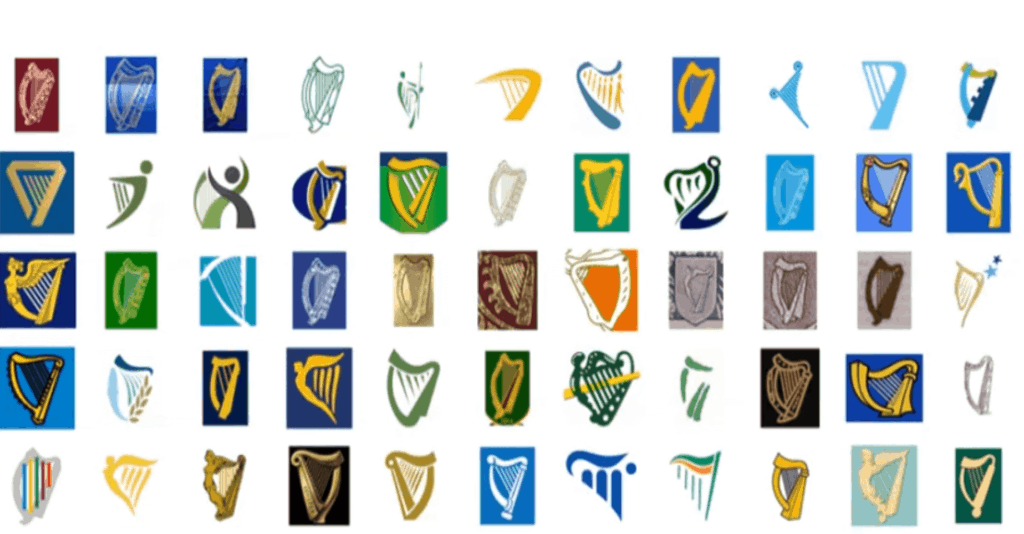 As you can see the Irish harp symbol has weaved its way throughout Irish history.

What else can I say?

Let me know in the comments and if you haven’t already, join my weekly dose of Irish where I send out all things Irish just like this article.

I hope you have enjoyed learning more about the Irish harp and do encourage you to share where you can.

Be sure to PIN the following image if you use Pinterest. You can do so just by clicking on it. 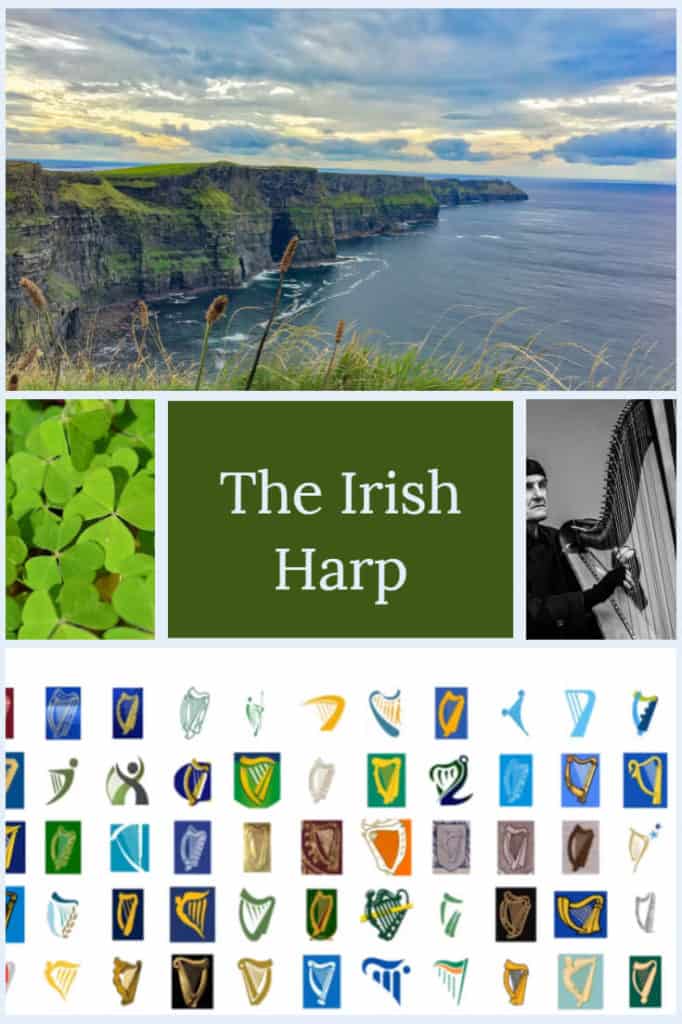 P.S A Harpist walks into a bar…“Need a drink?” said the barman. “Yes,” she replied, “I’m highly strung.” – Haha sorry, couldn’t resist. Pop over to my Irish jokes section for more humour.

Thanks for the article! As a yank, it was really hard to read it without an Irish accent so I definitely appreciate the layout and tone taken.

You fantastically displayed the historical relevance of the harp in Ireland back to the 17th century with the rebellion (that I’m about to look up) and it left me wondering why the harp was chosen as an emblem. Did Owen just REALLY like harps? Did he play the harp? Was it a harp song that made him go all Rage Against the MachEnglish and rise up?

Anyway, thanks again for the article!

The Harp is what the Sea of Galilee is named after. Biblically speaking,the very word Bet(h) Shean was anciently known as Scyth-opolis. The Scyth is a weapon related to the harvest season aka the ember/amber months - Sept-ember, Octo-ber,Nov-ember,Dec-ember. Christianity is 100% based up astrology. Even Labor Day has nothing to do with men and women working,but rather with the Spring and Harvest Seasons of Mother Earth. Labor is therefore related to the mother as in laboring of children as in mother nature's children - fruits and veggies. In America, we are taught another lie too which is Independence Day aka 4th of July. America did not win it's Independence from En-gael-nd/England. Rather, Independence has to do with the Aphelion of the 🌞 and dependence of the 🌞. Based upon the solstice, June 21st, is 13-14 days prior to the 4th of July. This is when Earth in the Western hemisphere is no longer dependent upon the Sun for it's warmth and light. In the winter Solstice, December 21st, we are dependent upon the Sun for said light and warmth.

In a previous article, the author mentions the "Vase found in Egypt with the triskelion image upon it as being one of the oldest images worldwide" and that the triquetra and triskelion are the oldest spiritual symbols worldwide as well. Well, I have to disagree. It's time the world realizes the truth of just how many lies we have been conditioned into believing.

For starters,the ancient Celts of 1400 BC, inwhich the article mentioned the Egyptian Vase with the triskelion image on it,well this timeframe coincides with the same time as the Hyksos and Atonist. The Atonist are the families or bloodlines associated with the Pendragons, as in Arthur/Uther Pendragon of Camelot and/or En-gael-nd. Because,the Celts, Irish, Scythian's, Magyars, Galatian's, Galacian's, Gælic, Gaulish, Hyksos, are all the same people's, or at least academia wants people worldwide to believe this, it can therefore be traced to the Merovingian's of Francia aka Frankish - "Germanic tribe." So, the timeline of 1400BC is the exact timeframe of the Hyksos invading the Ptolmaic Dynasty of Egypt. Which was under Greek rule at that timeframe. That said,the triskelion and triquetra could not be the oldest in spiritual history or physical history because the Bantu tribes of Africa, along with the Nubian culture predated the Ptolmaic Dynasty in Egypt. In fact, Kemetic people's ruled Egypt prior to Greek general Ptolemy and they had their own symbols. However, since their very history has been stolen and erased through slavery both with taking them from West Africa and East Africa, it clearly is displayed that their origin predates all of humanities.

A step further, Princess Scota, who married Milesian Prince, Goidel Glas, was also the Hyksos or Ptolmaic Dynasty Princess. She was not of Kemetic origin and was not Nubian.

When looking into Gnosticism, which is a known Freemason practice and also why Scottish people have "Scottish Rite" it's because it's a Hyksos practice originating in Hyksos (1400 BC) Egypt. Gnosticism is also a stolen and altered spiritual practice originating within the Kemetic spiritual practice of the Nubian people's. The same holds true with Christianity. Christianity consistently refers to 'Shepherds'. The shepherd's have origin amongst the Germanic tribal people's including the ancient Celts. The Greeks and Romans did not create it, nor did any of the Scandanavian people's. Yes, they do practice it today,but more so out of political reasons than any other.

As an ancestor of the High Kings of Ireland, it saddens me deeply to realize the depths that European royalty would go,to deceive the world into thinking the world began with them.

Look deeper into the things you speak of. Study the Sea of Galilee and the Harp. Know that Hebrew was originally spelled Hibiru and is also of African origin with African people's. The out of Africa story doesn't hold value and has no substantial evidence, especially when one realizes the original Jerusalem was not in the middle east,but rather in Southern Africa. Perhaps, this is something that has been known amongst the English royal families and their reasoning for settling in Southern Africa among all other continents and countries around the world...

Just a question - was the Harp commonly recognised as a symbol of Ireland (rather than guiness) before the Free State? Eg around 1900?

The Harp, (Harpy - Greek symbolism). The Harp is the name for the Sea of Galilee aka Gal-ilee. It's a Celtic word claimed Hebrew. Hebrew was originally spelled Hibiru and is of African people's origin.

The Irish are the people of the book. The harp goes back to King David, the Irish were in Ireland when Jesus walked the earth his uncle Joseph of Aaremethia the copper merchant visited the isles back then. Look into it. It’s so important. It is one of our many symbols the lion is all over England isn’t it? The lion of Judah? It all makes sense if your a serious researcher.

I am a serious researcher and I'm also Irish and Norwegian.

The only reason Jesus is spoken about within the Irish/Celts is due to their origin of origination. Look into Galacia-Volhynia. It's near Russia. It's home to the ancient Celts and Slavs. The Jewish we know of today are from Ukraine, formerly known as Khazaria and Jut-land/Gutland/Yutland. They became Jewish in 740AD, therefore they are not the original Jewish people's. The word David, etymologically refers to divide. This is also true with the word Bible. The prefix "Bi" means two. If one is bi-sexual or gets paid bi-weekly,it's referring to twice. Therefore, Bi-ble is speaking of either Bi-bull or Bi-Bowl. The Grail is two bowls - As above, so below. The upper bowl is masculine, while the lower bowl is feminine. The lower is where the lotus flower is seen in Hinduism. Hinduism is a Germanic tribes spiritual practice bc the Iranian people's are actually Aryan people's, thus they are European. European people,white European people are ruling the world, especially white Royalty. Royalty has to do with ancient Nubian culture which are the original peoples of Egypt/Kemet. Jerusalem did not originate in the Middle East either. It's original location is in South Africa. People of Royalty know all to well that Blue represents the feminine and Red represents the masculine. Therefore, combined, the two colors are symbolic of Purple. And,Purple is a color of Royalty,not due to a mollusk found in the city or water near ancient Tyre (Tyr in Norwegian tradition).

As I mentioned above, I am Irish as well as Norwegian and I am ashamed to know what my ancestors have done and how corrupted they have been. The Hyksos and Ptolmaic Dynasty of Egypt were not the original inhabitants of ancient Kemet/Egypt and no matter how many artifacts they remove from Kemet/Egypt or anywhere else, they will never be the original peoples, much less the Creators chosen people.

Today, the world is awakening, and nothing can stop that now. The truth will prevail.

One last thing, the "Lion" if Judah should have been your first clue. There were no lions on the Pontic Steppe of Russia where the ancient Celts originated. Lions are of Africa and the African people's culture.

If I were you, if look into sometime etymology, symbolism, and genuine history and not just the Oxford or Collins type of history or just European history. Rather, do some real deep research. And know, History is nothing more than the victors story or rather his-story...