The Celtic cross has a fascinating and complex story behind it.

In recent years the cross has been popularised in many Irish symbolic tattoos.

It appeared back in Ireland and Britain in the early middle ages.

The true origins of the Celtic cross are unknown, but there is plenty of theories and legends.

What is the meaning behind the Celtic cross?

A Celtic cross in an Irish field.

As I mentioned above the cross has many theories.

One to popular theory is that the cross was introduced by St Patrick when he was converting the pagans in Ireland to Christianity.

It is a Celtic symbol of both culture and faith.

The cross has a few variations, but typically you will always be able to make out the symbol of a cross.

By exact definition, an Irish Cross or Celtic Cross has to have four semi-circles cut away at the four points where the horizontal and vertical beams meet. 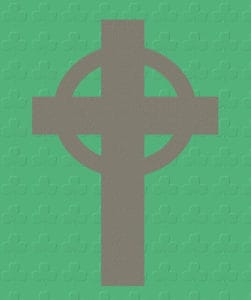 It is also a common trait that the lower vertical section is wider at the base than at the point where it meets the centre, while the other sections are rectangular.

Neither of these is strictly are strictly adhered to in modern symbols.

For example the logo of the GAA dating back as far as 1924 still has the original conditions in place. Source: Wikipedia

The difference between a Celtic Cross and a Sun Cross

If you are looking for some Celtic cross jewellery make sure that you know the difference between a Celtic cross and a sun cross. 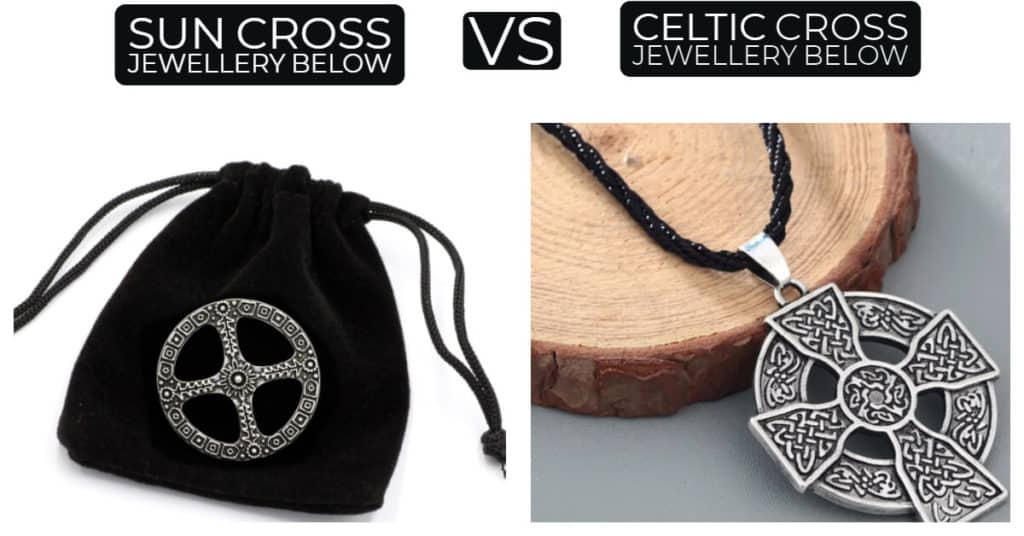 On the left sun cross and on the right Celtic cross

The sun cross is a symbol remarkably similar to the Celtic Cross. The sun cross actually predates the Celtic cross, and there are some theories that it might be a predecessor of the shape.

Main differences between the Celtic cross and the Sun cross:

The popularization of the cross tattoos in modern ages

Here are some examples of Celtic cross tattoos: 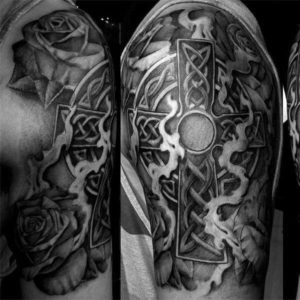 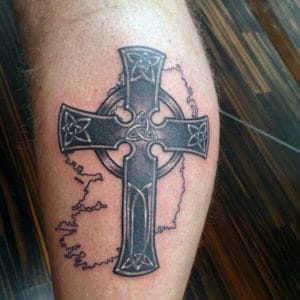 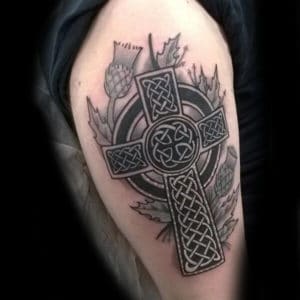 The Celtic Cross shares its popularity with the Celtic tree of life which seems to feature in modern jewellery more and more every day.

Final notes on the Celtic cross

The cross is rich in powerful representation and an ideal reflection of the hopes and ambitions of the Celts. 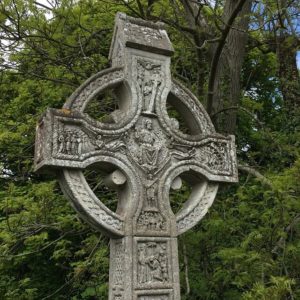 While the Cross is certainly a Christian symbol, it has its roots in ancient pagan beliefs at the same time.

It is a remarkable fact how widespread the distinct shape of the Irish Cross is in the modern era.

Original they were not carved out of the rock – they were inscribed on the rock.

In the mid-19th century, a Celtic revival led to an increased use of the ringed cross in Ireland, and the Celtic Cross became not only a religious symbol but an emblem of Celtic identity.

If you wish to know more about other incredible Irish symbols read my post here.

Join my weekly dose of Irish email list here. where I send my weekly summary of all things Irish.

Be sure to Pin the image below to your Pinterest board: 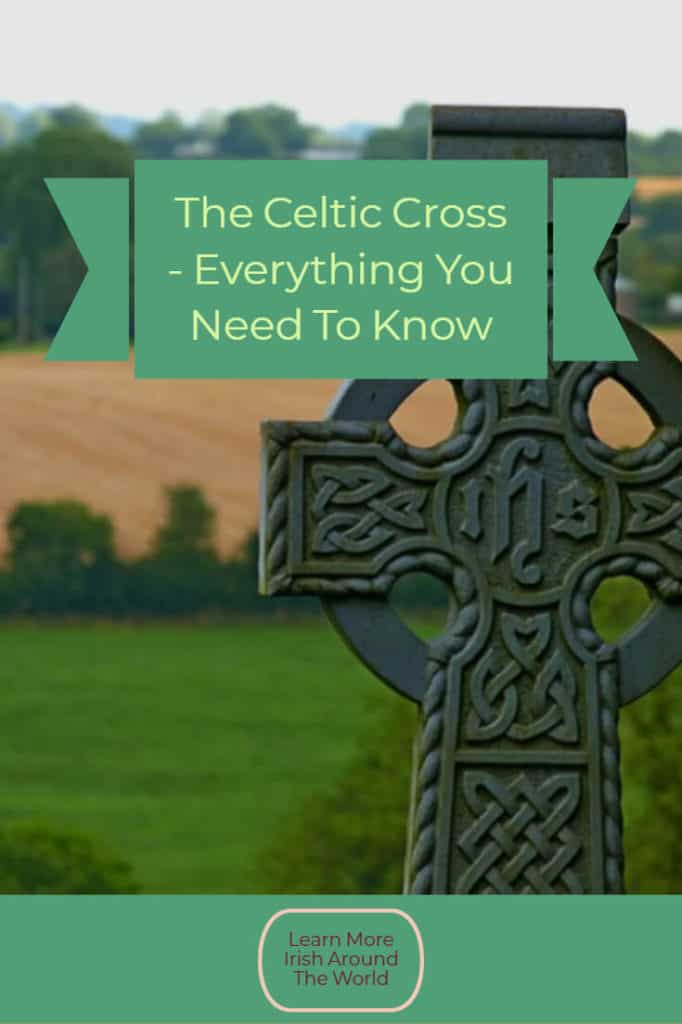 The history behind the Celtic cross came from St Patrick. At that time everyone were pagans with no knowledge of the heavens. St Patrick used the shamrock to teach the people how there were three Devine persons in the one God. Three leaves on one stem. He then talked about the heavens. Most pagans were sun worshipers. So he explained the heavens and how through the Father and the Son he explained how the earth was formed. On a true Celtic cross there are writings that help with this. St Patrick likened the sun to the heavens and put it around the cross so they could understand it was where the Three Divine Persons lived there and made things all possible on this earth. St Partrick brought Christianity to ireland through his lesson on the three Divine persons and how the world was formed. Most Irish wear it as a religious sign but also for what it stood for...including luck. It is not a crucifix as some believe. Hope this helps you understand a little more. From a 70 yr old irish person who was thought this from a 76yr old teacher.

There may be additional meaning, but it looks like it has the practical use of protecting the cross from deterioration by shedding rain from the top.

I have been trying to find out what the house on top of these beautiful grave markers represents. Can you provide the meaning? Many thanks!