Ah, the Triquetra, it has to be one of my favourite ancient Celtic symbols. Known to be one of the oldest symbols in history, famous in modern-day film and many people have the Celtic Triquetra tattoo.

So what is the meaning of a Triquetra?

The Triquetra essentially means a three-cornered symbol that connects to the power of three.

The power of three examples:

As you can see, there is much more to this ancient Celtic symbol than you might think.

In its purest form, the Triquetra is three interconnected ovals — one pointing upward, the other two pointing down, to the left and right. Just like this image of the basic Triquetra: 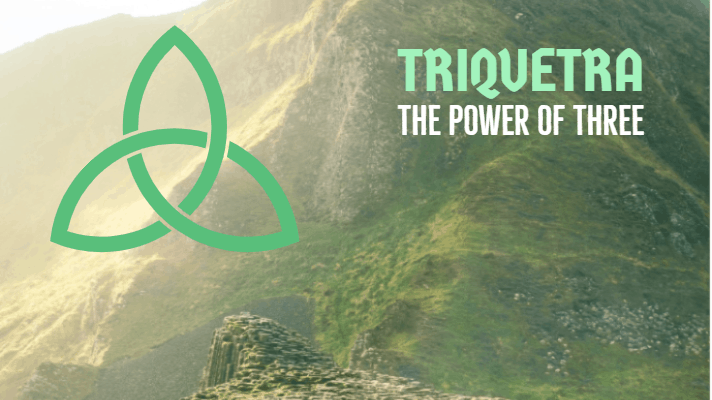 While many of the other Celtic symbols are popular in modern-day tattoos, the Celtic knot or “Triquetra” is one of the most popular.

Some incredible facts and appearances of the Triquetra or Trinity Knot:

So now you know just precisely what the Triquetra means; you might be saying that you have seen this symbol before.

Well, you would be right! This Celtic Symbol has had some impressive appearances in the modern-day.

Where did the Triquetra symbol come from?

Who created the symbol has been an issue of controversy for centuries:

Christians feel that it started with the Monks, who brought these designs along with their teachings of Christianity when attempting to convert the Celts of the day. However, the Triquetra has been speculated to be the oldest symbol of spirituality.

It appears in the ninth century in the Book of Kells as a decoration with no particular religious significance, and the symbol has been found in Norwegian churches dating to the 11th century. 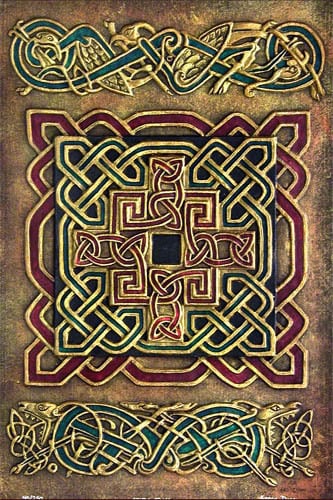 The book of Kells was written in Latin and stored safely in Dublin. Clear evidence of a Celtic Knot. It was created around 800AD.

It has been documented and carved onto tombs that are thousands of years old.

When the triple spirals are drawn in a straight line, it has been speculated that this represents life and death.

What is the meaning behind the Triquetra?

Meant initially as “triangle”, it was used to refer to various three-cornered shapes. Sometimes, the traditional symbol is accompanied by a circle.

This also relates to the Celtic tree of life; another example of where the Celts favoured that everything in this world came in threes.

What does a Triquetra tattoo mean?

The Triquetra image is a popular tattoo among men and women. The main symbology of this is not just because they look nice but the reason behind them.

If you see or are thinking about getting a Triquetra tattoo, the Triquetra can mean one of the following:

It is for this reason that not only have Triquetra tattoos become a famous symbol, but the Triquetra appears in knot-work, jewellery, emblems, logos and anything with a three-fold meaning.

Among females, the preference is for the smaller symbols visible on the wrist and the nape of the neck. 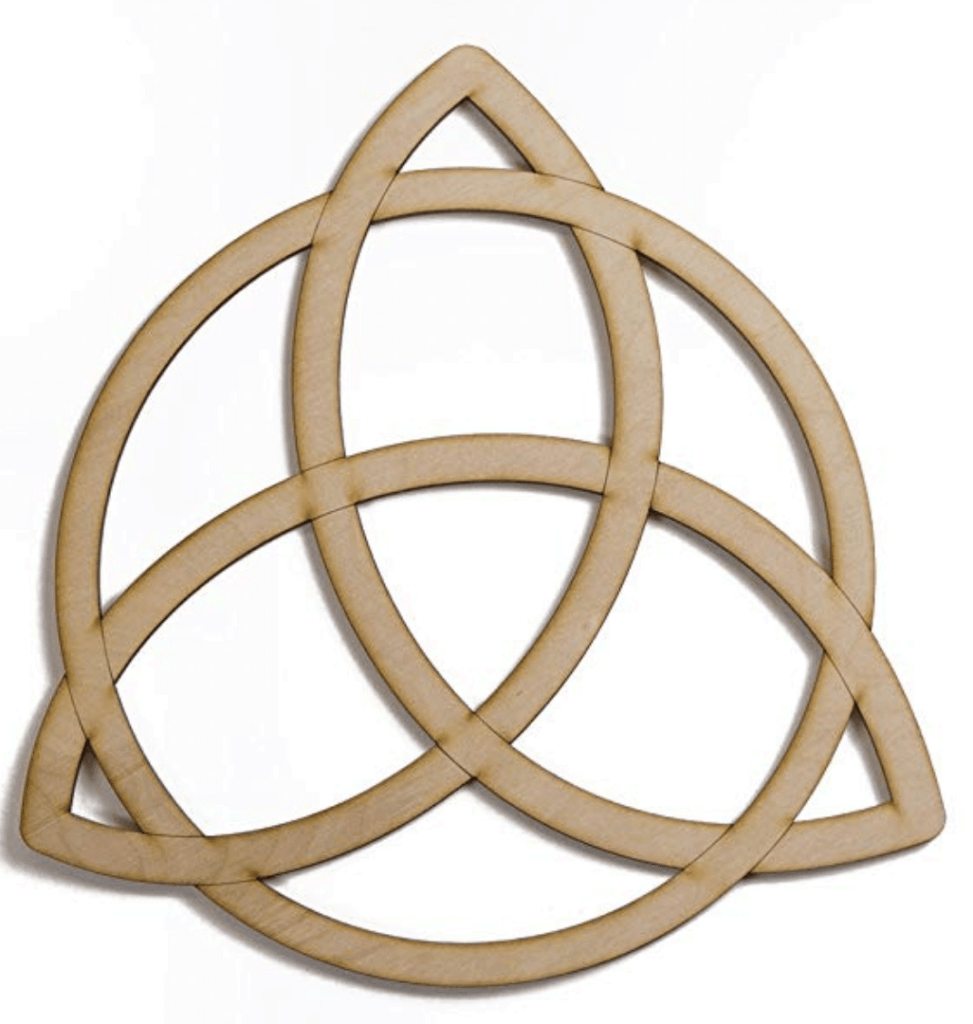 Get your own Trinity Knot on Amazon here

Sometimes it is drawn weaving around a circle, symbolising the unity of the three parts. The circle, in many belief systems, is a symbol of eternity.

I’ve had a request for an upside-down trinity knot, meaning:

The main upside-down trinity knot meaning is that it represents the opposite of all the attributes the right-side-up trinity knot stands for.

This could be interpreted as the opposite. Instead of moving from life, death to rebirth, it would now mean the reverse moving from rebirth to death.

Other interpretations could be upending of the Truth (such as in an upside-down cross) and a symbol of the beast.

But all that said, it could have no additional meaning and not be taken to mean anything different just because of the way it is displayed.

Some final notes on the Triquetra 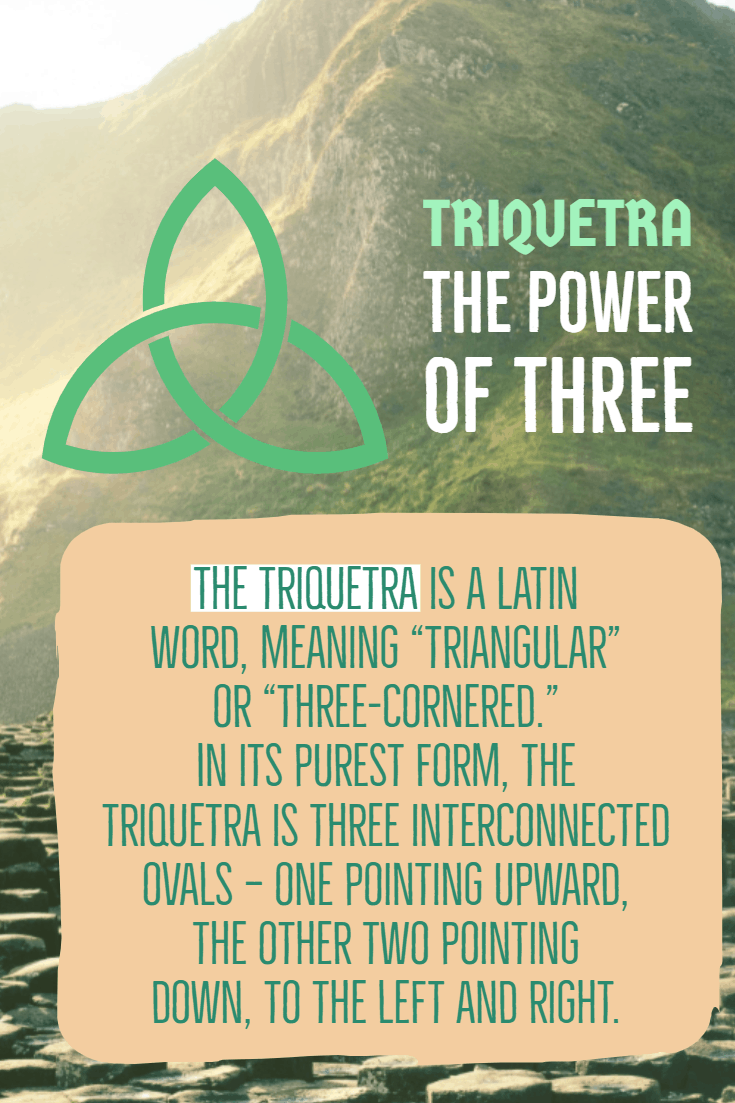 Whether it is the eternity of God’s love or the eternal circle of life itself, the circle adds even more weight to the significance of the Triquetra.

So, whether you’re Christian, Pagan, or somewhere in between, there’s a good chance that the Triquetra could hold some kind of personal significance, and no one else can dictate what it should mean to you.

If you enjoyed this post, I would suggest learning about some other Celtic Symbols here. I also have this detailed post on 7 other types of Celtic Knots, which includes a Triquetra.

Otherwise, thanks for reading, and don’t forget to grab your weekly dose of Irish(a free email I send every Friday on all things Irish) right here.

You said that Father, Son, and Holy Spirit are "elements". This is not true. The 3 Persons of the Godhead are Spirit and they are One. God is alive He is not an element. It's all there in the Holy Bible over and over. It's always a good thing to learn. 🙂

2 Also, Billions of people, (including yours truly); alive and passed on can testify God is alive.

There are 3 symbols that pertain to God. The white Dove 🕊 represents the Holy Spirit, The fish drawn with two lines was the symbol for the 1st century Church of Jesus Christ; it was a secret way they could safely show each other that they were a Christian without saying a word during times of persecution.

And last, but not least the cross ✝️ which signifies the finished Work of Christ on the cross; his Sacrifice for the world.

The triquetra has never been a true symbol of anything about God. It is a Witchcraft symbol though. Celtic knots are used a lot in Celtic witchcraft and and by Traditional witches as well.

The Triquetra has been used in spells and other workings of witches for hundreds of years. It's a trick of the modern witch in fact, to con Christians into using this witches symbol for quite a while now.

The Christian who doesn't know is easily fooled unfortunately. It began with the Catholic church. Look it up.

It's always good to learn something new. 🙂

It doesn't make a difference which way the point is facing. It represents the Trinity, Power of 3. Anyone who makes it out to be something evil or wrong is incorrect.

Thank you Wendy for the comment. The main upside down trinity knot meaning is that it represents the opposite of all the attributes the right-side-up trinity knot stands for.

This could be interpreted as the opposite. Instead of moving from life, death to rebirth it would now mean the reverse moving from rebirth to death.

Other interpretations could be upending of the Truth (such as in an upside-down cross) and a symbol of the beast.

But all that said it could have no additional meaning and not be taken to mean anything different just because of the way it is displayed.