My Facebook group for Irish jokes has been growing like crazy in the past few months. On average we are now getting over 1000 new member requests every week!

The Irish jokes that have been coming in daily have been just great. So I put up a poll last week to see if people would be interested in a monthly round-up of all the top jokes.

And with over a hundred replies I knew it was something you would all enjoy.

Not sure exactly how many Irish jokes I will include in each article. You can also get them straight to your inbox on my Irish jokes mailing list that I send out every Friday. Join here.

You can also share any of these images on social media.

Okay, time to reveal the best Irish jokes for December.

These are in no particular order, enjoy!

Three men died on Christmas Eve and were met by Saint Peter at the pearly gates.

“In honour of this holy season,” Saint Peter said, “you must each possess something that symbolizes Christmas to get into heaven.”

The Englishman man fumbled through his pockets and pulled out a lighter. He flicked it on. It represents a candle, he said.

You may pass through the pearly gates Saint Peter said.

The Welsh man reached into his pocket and pulled out a set of keys. He shook them and said, “They’re bells” . Saint Peter said you may pass through the pearly gates.

The Irish man started searching desperately through his pockets and finally pulled out a pair of women’s panties.

St. Peter looked at the man with a raised eyebrow and asked, “And just what do those symbolize?” 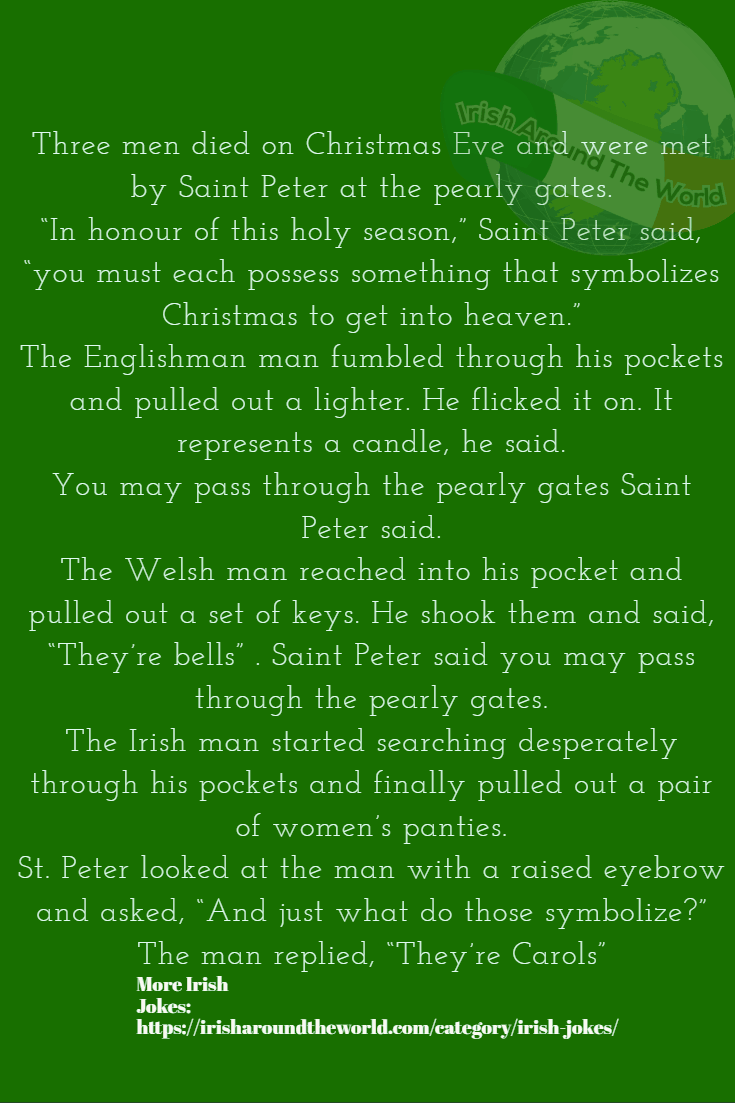 Mick: I’ve been going to Night Classes every night for 5 months now.

Mick: For example, do you know who Alexander Graham Bell is?

If you took night classes you’d know this.

Mick: Do you know who Alexander Dumas is?

Mick: He’s the author of “The 3 Musketeers”.

If you took night classes, you’d know this.

The next day, once again:

Mick: And do you know who Jean-Jacques Rousseau is?

Mick: He’s the author of “The Confessions”

If you took night classes, you’d know this.

This time, Paddy got irritated and said:

And you Mick … Do you know who Sean Reilly is?

If you stopped going to night classes, you’d know this! 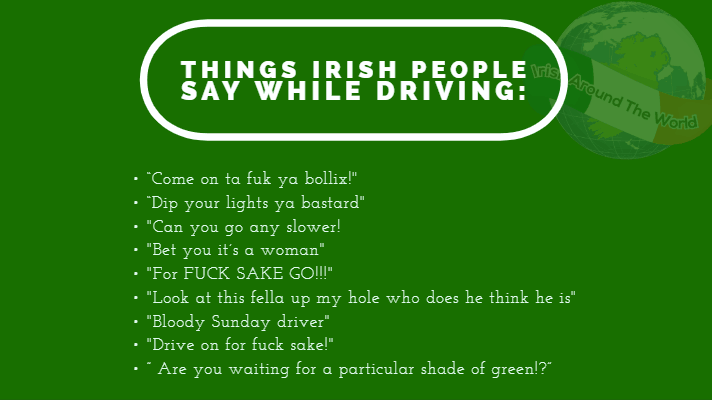 4) The Four stages of man

5) An Englishman, a Scottish man, and an Irish man all walk into a pub with their wives.

They all sit down and order a cup of tea. The Englishman looks to his wife and says “could you pass the honey, honey?”

The Scottish man thinks to himself how clever that was, then turns to his wife and says “could you pass the sugar, sugar?”

The Irish man – not wanting to be outwitted by the other two men – looks over at his wife and says “Could you pass me the milk ye fucking cow?”

That is all the Irish jokes for this month. There were a good few jokes that nearly made the cut but I wanted only the best from the group. Be sure to join the Facebook group here where you can see all of the other Irish jokes.

Thanks for stopping by!