209 shares
It has been a while since I put together a new list of Paddy and Murphy jokes. This is a great selection that I handpicked. Remember they are just jokes so if any do offend you I do apologize. Guaranteed to bring a laugh.
I send out a new Irish joke every Friday straight to your inbox you can subscribe here.
I also have a huge collection of other Irish jokes here. 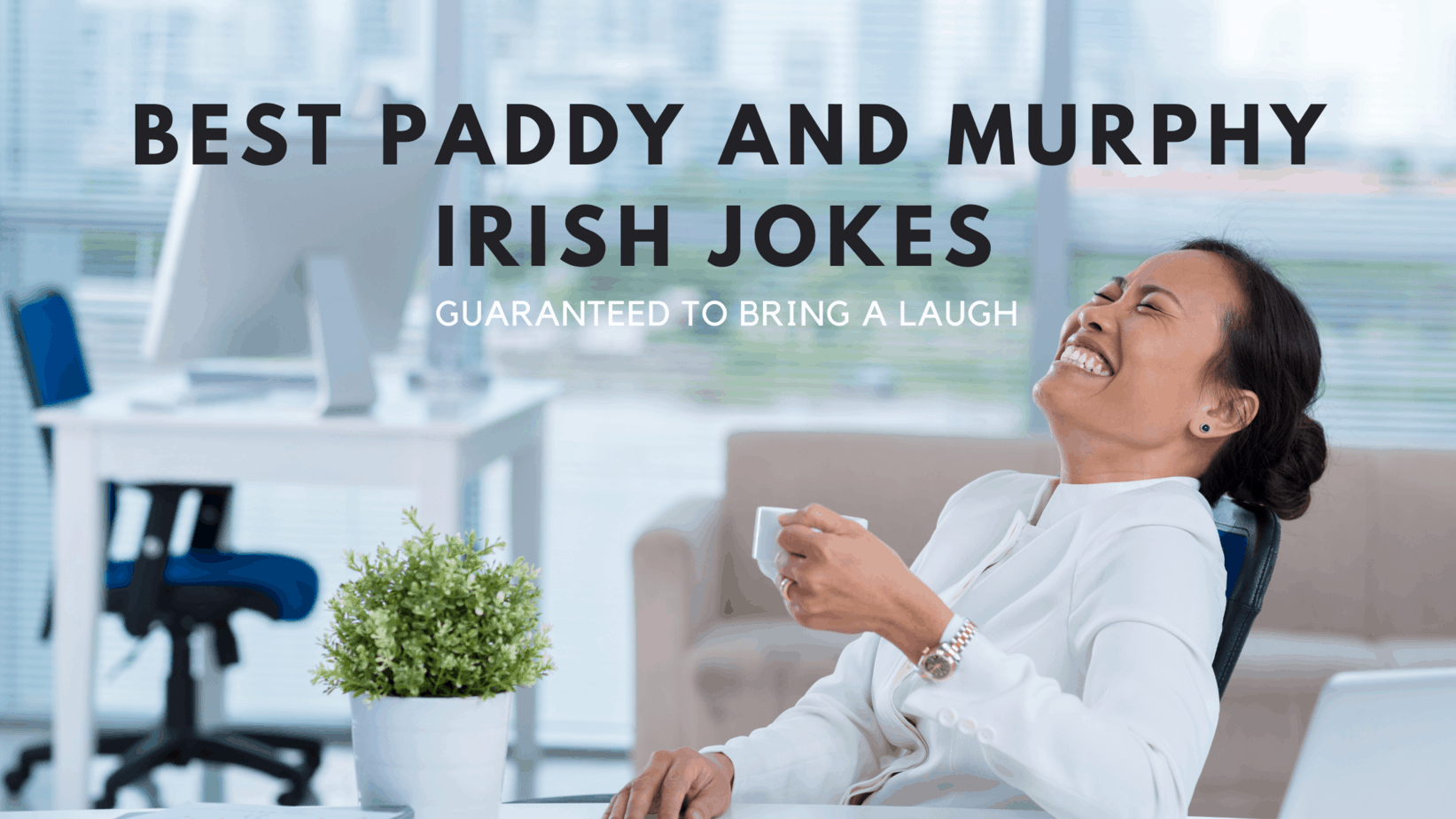 Murphy’s old lady had been pregnant for some time, and the time had come.
He brought her to the doctor, and the doctor began to deliver the baby.
She had a little boy, and the doctor looked over at Murphy and said.
‘Hey, Murph! You just had you a son!
‘Ain’t dat grand, !!’
Murphy got excited by this, but just then, the doctor spoke up and said,
‘Hold on! We ain’t finished yet, !’
The doctor then delivered a little girl.
He said, ‘Hey, Murph! You got you a daughter!!!! She is a pretty Lil ting, too….’
Murphy got puzzled by this, and then the doctor said,
‘Hold on, we aint got done yet, !’
The doctor then delivered another boy and said,
‘Murph, you just had yourself another boy!’
Murphy said to the doctor,
‘Doc, what caused all of dem babies?’
The doctor said,
‘You never know Murph; it was probably something that happened during conception.’
Murphy said,
‘Ah yeah, during conception.’
When Murph. and his wife went home with their three children, he sat down with his wife and said,
‘Mama, you remember that night that we ran out of lube, and we had to use that dere 3-in-1 Oil.’
She said, ‘Yeah, I remember that night…’
Murph said,
‘I’ll tell you, …..it’s a freaking’ good thing we didn’t use WD-40.

Paddy Irish Joke 3: The Irish farmer and his employees.

Paddy McCoy, an elderly Irish farmer, received a letter from the Department for Work & Pensions stating that they suspected he was not paying his employees the statutory minimum wage and they would send an inspector to interview them.
On the appointed day, the inspector turned up.
“Tell me about your staff,” he asked Paddy.
“Well,” said Paddy, “there’s the farmhand, I pay him €240 a week, and he has a free cottage.
Then there’s the housekeeper. She gets €190 a week, along with free board and lodging.
There’s also the half-wit. He works a 16 hour day, does 90% of the work, earns about €25 a week along with a bottle of whiskey and, as a special treat, occasionally gets to sleep with my wife.”
“That’s disgraceful,” said the inspector, “I need to interview the half-wit.”
“That’ll be me then,” said Paddy!

Paddy Irish Joke: The drunk man outside the bar

On a routine police patrol parked outside a local neighbourhood pub in Listowel, the Garda noticed a man leaving the bar so intoxicated that he could barely walk.
The man stumbled around the parking lot for a few minutes, with the officer quietly observing.
After what seemed an eternity and trying his keys on five different vehicles, the man managed to find his own car, which he fell into.
He was there for a few minutes as several other patrons left the bar and drove off.
Finally, he started the car, switched the wipers on and off ( it was a dry night ), flicked the hazard flasher on and off, tooted the horn, and then switched on the lights.
He moved the vehicle forward a few inches, reversed a little, and then remained stationary for a few more minutes as more patrons left in their vehicles.
At last ( when almost everyone had left ), he pulled out of the parking lot & started to drive slowly down the street.
The police officer, having patiently waited all this time, now started up his patrol car, put on the flashing lights, promptly pulled the man over and carried out a breathalyser test.
To his amazement, the breathalyzer indicated no evidence of the man having consumed alcohol at all!
Dumbfounded, the officer said, “I’ll have to ask you to accompany me to the Police Station. This breathalyzer equipment must be broken.
“I doubt it,” said the man, “Tonight, I’m the designated decoy. They all got away!”

Paddy wanted to have sex with a girl in his office, but she belonged to someone else…
One day, Paddy got so frustrated that he went up to her and said, “I’ll give you a €100 if you let me
shag you.
But the girl said NO. Paddy said, “I’ll be fast. I’ll throw the money on the floor,
you bend down, and I’ll be finished by the time you pick it up. “
She thought for a moment and said that she would have to consult her boyfriend…
So she called her boyfriend and told him the story. Her boyfriend says,
“Ask him for €200, pick up the money very fast; he won’t even be able to get his pants down.”
So she agrees and accepts the proposal. Half an hour goes by, and the boyfriend is waiting for his girlfriend to call.
Finally, after 45 minutes, the boyfriend calls and asks what happened.
She responded, “The bastard used coins!”

Paddy Irish joke 5: Paddy has his day in court

A farmer named Paddy had a tractor accident. In court, the trucking company’s fancy hot shot lawyer was questioning Paddy. “Didn’t you say, at the scene of the accident, ‘I’m fine,’?” asked the lawyer.
Paddy responded, “Well, I’ll tell you what happened. I had just loaded my favourite cow, Bessie, into the…”
“I didn’t ask for any details”, the lawyer interrupted. “Answer the question, …please. Did you, or did you not say, at the scene of the accident, ‘I’m fine!’?”
Paddy said, “Well, I had just got Bessie into the trailer behind the tractor, and I was driving down the road….”
The lawyer interrupted again and said, “Your Honor, I am trying to establish the fact that, at the scene of the accident, this man told the Highway Patrolman on the scene that he was just fine. Now, several weeks after the accident, he is trying to sue my client. I believe he is a fraud. Please tell him to simply answer the question.”
By this time, the Judge was fairly interested in Paddy’s answer and said to the lawyer, “I’d like to hear what he has to say about his favourite cow, Bessie”.
Paddy thanked the Judge and proceeded. “Well, as I was saying, I had just loaded Bessie, my favourite cow, into the trailer and was driving her down the highway when this huge semi-truck and trailer ran the stop sign and smacked my John Deer Tractor right in the side. I was thrown into one ditch, and Bessie was thrown into the other. I was hurting, real bad and didn’t want to move. However, I could hear old Bessie moaning and groaning. I knew she was in terrible shape just by her groans.
Shortly after the accident, a Highway Patrolman came on the scene.
He could hear Bessie moaning and groaning, so he went over to her. After he looked at her and saw her fatal condition, he took out his gun and shot her between the eyes.
Then the Patrolman came across the road, gun still in hand, looked at me, and said, “How are you feeling?”
“Now tell me, Judge, how would you answer???”

Hope you enjoyed these Paddy and Murphy Irish jokes!

For more Irish jokes go here or to get your weekly dose of Irish, go here.

Have a great day,