It lasts for three days and involves fasting, praying barefoot around stone “beds”, and other various penitential exercises which make up the “station.” For over 1500 years, pilgrims have been visiting the Lough Derg shores to find peace & pray for loved ones. Lovely right? Not my cup of tea!

According to legend, this Island site dates from the fifth century when Jesus Christ showed St Patrick a cave on Station Island. This cave was supposedly an entrance to Purgatory that St Patrick had visions in from the otherworld, hence the name “St Patricks Purgatory”.

The cave that started it all has been closed since 1632 and covered over by the Basilica to protect others and welcome people from all over the world to visit and pray over the gateway for all time. 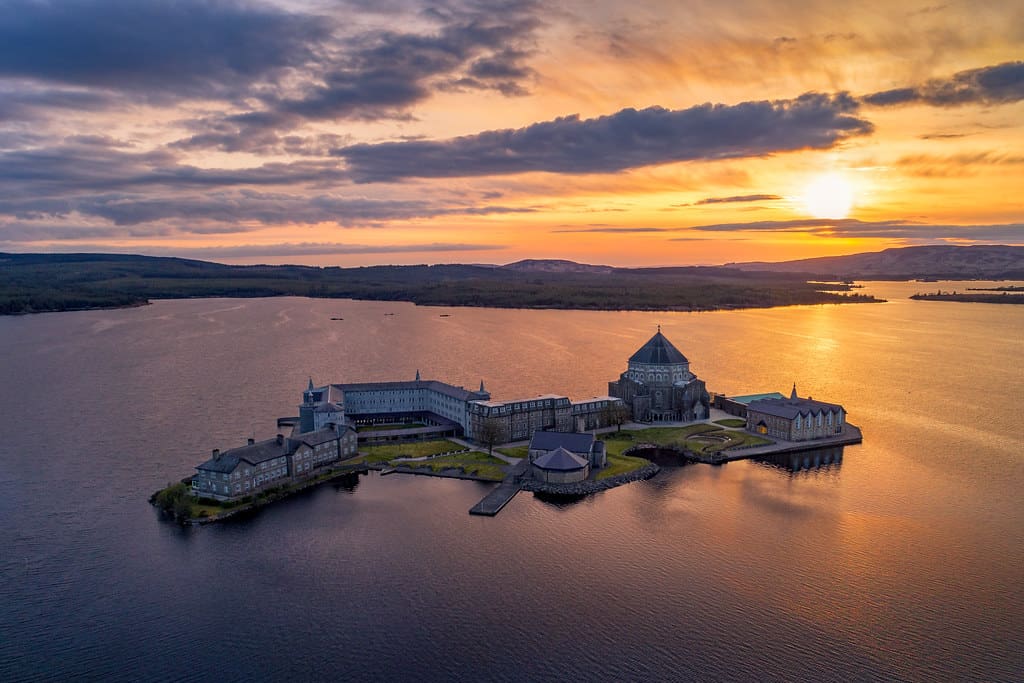 Once again, with Seamus Heaney, we get plenty of powerful imagery. If he were a painter, I would imagine his paintings to be highly detailed while simple. Heaney’s great skill was his way of putting words so that they transported you to the place, time or event. Don’t believe me? Give a read of his other poems, such as blackberry-picking or mid-term break. And let’s not forget that he appears ten times on the top Irish poems list!

As I said, this is no short poem but worth a read. This is only a selection from the whole book(collection), including 25 poems. If you are interested in picking up the book, you can see it on Amazon here.

I have only included part one of the first part, and you will see even after a few minutes of reading that you will be transported to the place.

Something beat on iron:
a hurry of bell-notes
flew over sedge and iris,
an escaped ringing
that stopped as quickly

as it started. Sunday,
the silence breathed
and could not settle quite
for a man appeared
at the back of the hedge

with a bow-saw, held
stiffly up like a lyre.
He moved and stopped to gaze
at the shins of hazel trees,
then angled the saw in,

pulled back to gaze again
and moved on to the next.
“I know you, Simon Sweeney,
for an old Sabbath breaker
that has been dead for years!”

“Damn all you know,” he said,
his eye still on the hedge
and not turning his head.
“I was your mystery man
and am again this morning.

Through gaps in the bushes
your First Communion face
would watch me cutting timber.
When cut or broken limbs
of trees went yellow, when

woodsmoke sharpened air
or ditches rustled
you sensed my trail there
as if it had been sprayed.
It let you half-afraid.

you shut your eyes to see
a wet axle and spokes
in moonlight, and me
streaming from the shower,
headed for your door.”

Sunlight broke in the hazels,
the quick bell-notes began
a second time. I turned
at another sound:
a crowd of shawled women

were wading the young corn,
their skirts brushing softly.
Their motion saddened morning.
It whispered to the silence,
“Pray for us, pray for us,”

it conjured through the air
until the field was full
of half-remembered faces,
a loosed congregation
that straggled past and on.

As I drew behind them
I was a fasted pilgrim,
light-headed, leaving home
to face into my station.
“Stay clear of that procession—”

he was shouting angrily,
“Don’t turn your back again.
Sooner or later, son,
you will have to face me
with both eyes open.”

But the murmur of the crowd,
and their feet slushing through
the tender bladed growth
was another scent picked up,
a drugged and open path

I was set upon.
I trailed those early-risers
who had fallen into step
before the smokes were up.
The quick bell rang again.

What did you think of this fantastic Irish poem?

Comment below and let others know. And thanks for stopping by; I hope to see you again soon.