Just like the Irish Harp, the Shamrock has appeared throughout Irish history.

So there is no confusion the national symbol of Ireland is the Harp, not the shamrock.

The Shamrock is the national flower of Ireland.

In fact, Ireland is the only country in the world with a musical instrument as its national symbol.

By the end of this article, you will know everything you need to know about the Shamrock.

Just where and how did the Shamrock become a symbol of Ireland? 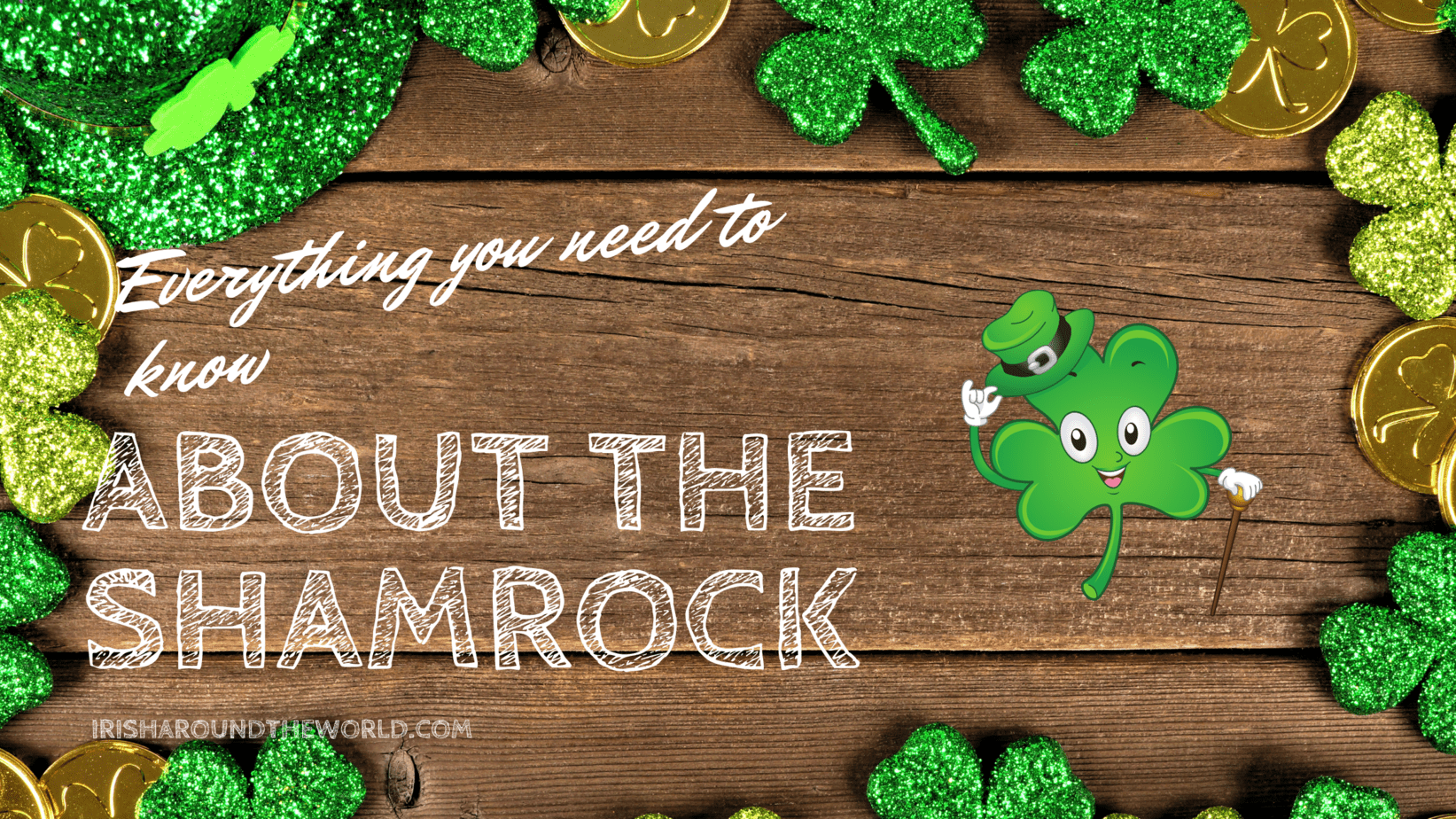 St. Patrick allegedly used the three-leaf clover to teach people about Christianity as he traveled around Ireland. He said the leaves illustrated the Father, Son and the Holy Spirit of the Holy Trinity.

You might be saying, “Ah sure it was because of St Patrick himself that we have it as one of our symbols?!”

In part, you would be correct. On the other hand, he certainly did put it on the main stage.

But it was the Celtic druids who started the shamrock on its path into Irish history!

The shamrock was originally associated with the Celtic goddess Ana or Anu, with the three leaves representing her status as the maiden, mother and crone of Ireland.

If you have read my article on the top Celtic symbols, you will know that Celts had this massive belief in the number 3.

It was known as “the perfect number”. Just like with the Awen Celtic Symbol, this meaning of three was represented in so many ways.

It didn’t stop there. Celtic society was organised around the sacred three, with three classes, three colours, and three principal gods.

So is it true that St Patrick used the three-leaf clover to convert Ireland to Christianity?

It doesn’t matter if he did or did not. This is because at the time it was reported as truth, Irish people had already chosen it as their symbol.

It is possible that St Patrick knew the importance of the number 3 to the Celts and used the Shamrock to explain the Holy Trinity. I.e. The Father, Son and Holy Spirit. 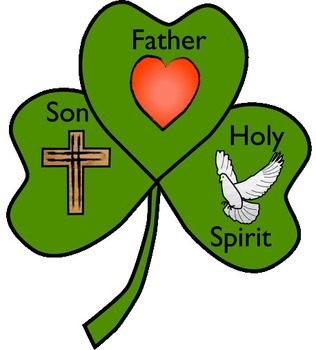 So when did it become an unofficial Irish symbol?

It has been considered the unofficial national flower of Ireland for centuries.

The first evidence of a link between St Patrick and the shamrock appears in 1675 on the St Patrick’s Coppers or Halfpennies.

These appear to show a figure of St Patrick preaching to a crowd while holding a shamrock, presumably to explain the doctrine of the Holy Trinity. 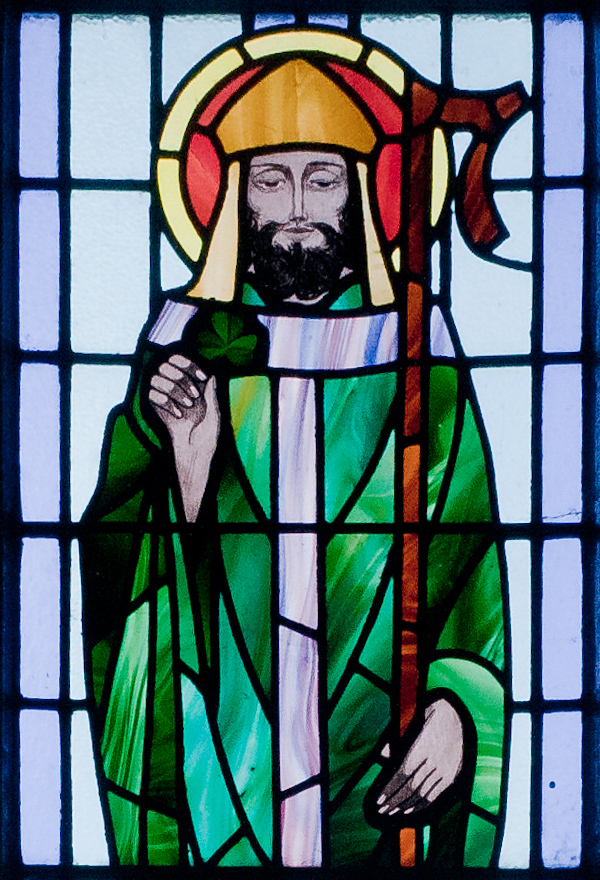 By the 1770s, it had undoubtedly been adopted as the emblem of the Irish Volunteers, a militia with republican sympathies.

This is where it came to be associated with rebellious, nationalistic views and led Queen Victoria’s government to forbid all Irish regiments within the British Army to wear shamrock in the 19th century.

These days, a member of the British Royal Family presents shamrock to the Irish Guards regiment, so it seems the dear shamrock plant has been rehabilitated!

What is the meaning of the word “Shamrock.”

The word shamrock comes from the Old Irish “seamróg”, which can be translated as “little clover”. The Irish word for clover is “seamair”, and óg means “young” or “little”.

Since it is the most emblematic Irish symbol, it’s no wonder that it is everywhere: embroidered
on clothes, incorporated in rings, pendants, earrings, bracelets, brooches, and even on buckles
for bringing extra attention to Irish dancing hard shoes.

The Irish shamrock in modern-day Ireland:

The shamrock is used in the emblems of many state organisations, both in the Republic of Ireland and Northern Ireland.

Some of these are all-Ireland bodies, for example, Tourism Ireland.

The Irish Postal Service An Post regularly features the shamrock on its series of stamps. 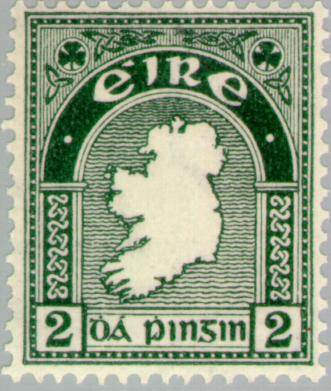 The airline Aer Lingus uses the emblem in its logos, and its air traffic control call sign is “SHAMROCK”. 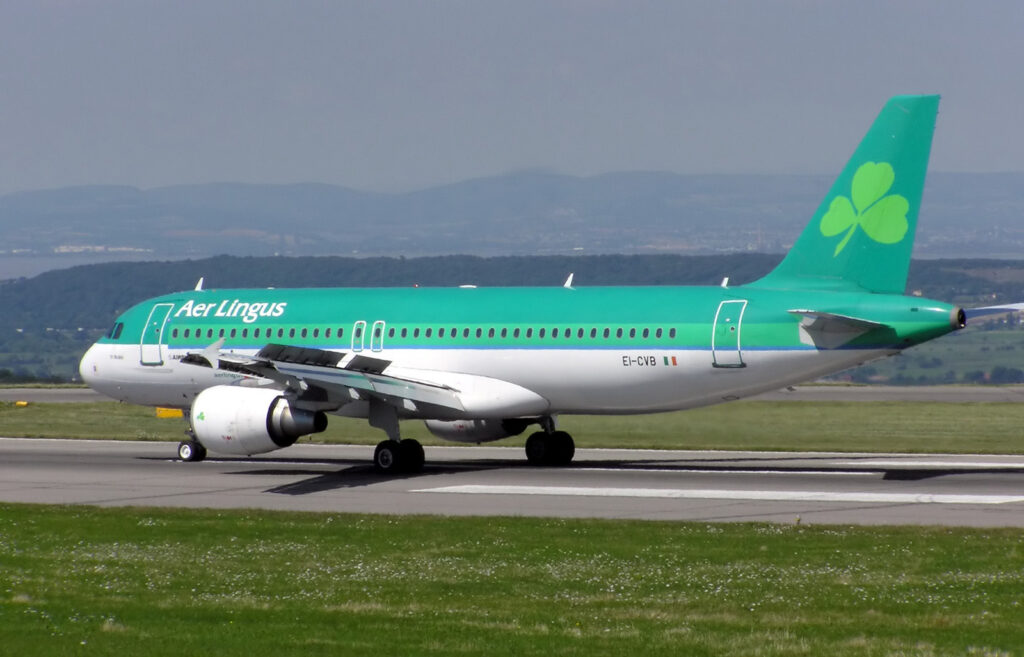 Germany once tried to use the shamrock in the early 1980s. However, it has been trademarked by the Government of Ireland.

In the early 1980s, Ireland defended its right to use the shamrock as its national symbol in a German trademark case, which included high-level representation from Taoiseach Charles Haughey.

Having lost initially, Ireland won on appeal to the German Supreme Court in 1985. 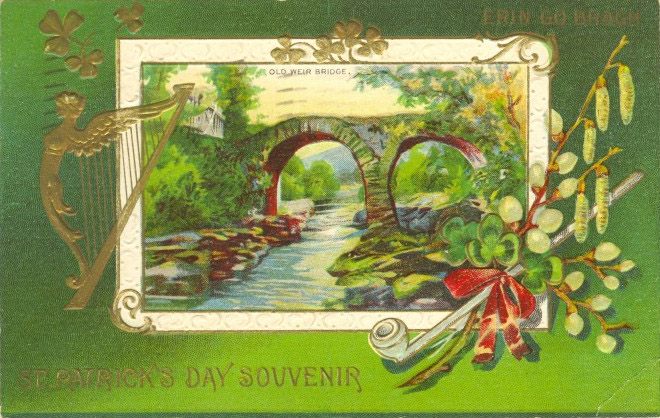 Nowadays, the word Shamrock appears in thousands of pubs, restaurants, BnB’s and even in McDonald’s back in the 1970s with the well known “Shamrock Shake.” 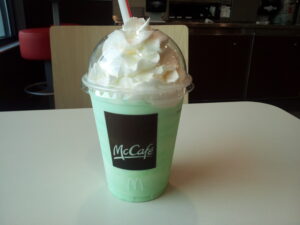 The difference between a shamrock and a four-leaf clover

You may have heard of the “Luck Of The Irish“, and one should not mistakenly call a shamrock a four-leaf clover.

The three leaves of a shamrock are also said to stand for faith, hope and love(again with the symbol of threes).

A fourth leaf is where we get the luck from.

The four-leafed clover, or “lucky clover”, is an uncommon variation of the three-leafed clover and widely considered to be a symbol of good luck.

Shamrock, or “seamrag” in Gaelic, means “little clover”, which is so fitting because shamrocks and four-leaf clovers belong to the white clover plant family.

Can you grow your own Shamrock?

It is widely thought that shamrock is very hard to grow, especially outside of Ireland. This is not
quite true. This plant just needs warm to cool air, moist soil, and enough sun when it’s flowering.
If you want to sow it indoors, you can do so all year round; just make sure the temperature is not
above 75 degrees.

Below is a lovely St Patrick’s day toast you can use next March:

Here’s to a long life and a merry one.

A quick death and an easy one.

A pretty girl and an honest one.

A cold beer and another one.

May your wishes come true, and your truth be wise.

A thousand welcomes when anyone comes… That’s the Irish for You!

May your blessings outnumber The shamrocks that grow, And may trouble avoid you Wherever you go.

May your glass be ever full. May the roof over your head be always strong. And may you be in heaven half an hour before the devil knows you’re dead.

Closing notes on the Shamrock 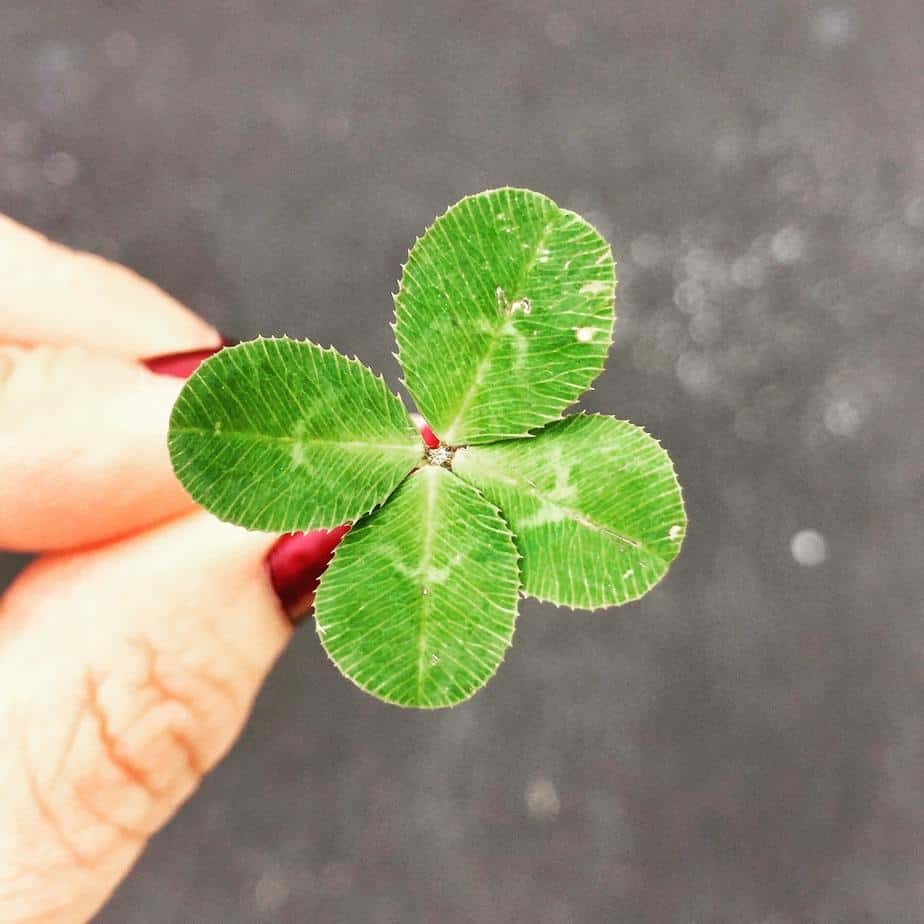 The Shamrock is certainly an iconic piece of Irish history, and I hope you have enjoyed learning a bit more about the Shamrock.

Have you ever found a four-leaf clover? Comment below.

If you find a four-leaf clover, you can take a cutting from its plant and put it in a cup of water until it grows roots.  Plant it in your yard to start your own lucky patch. 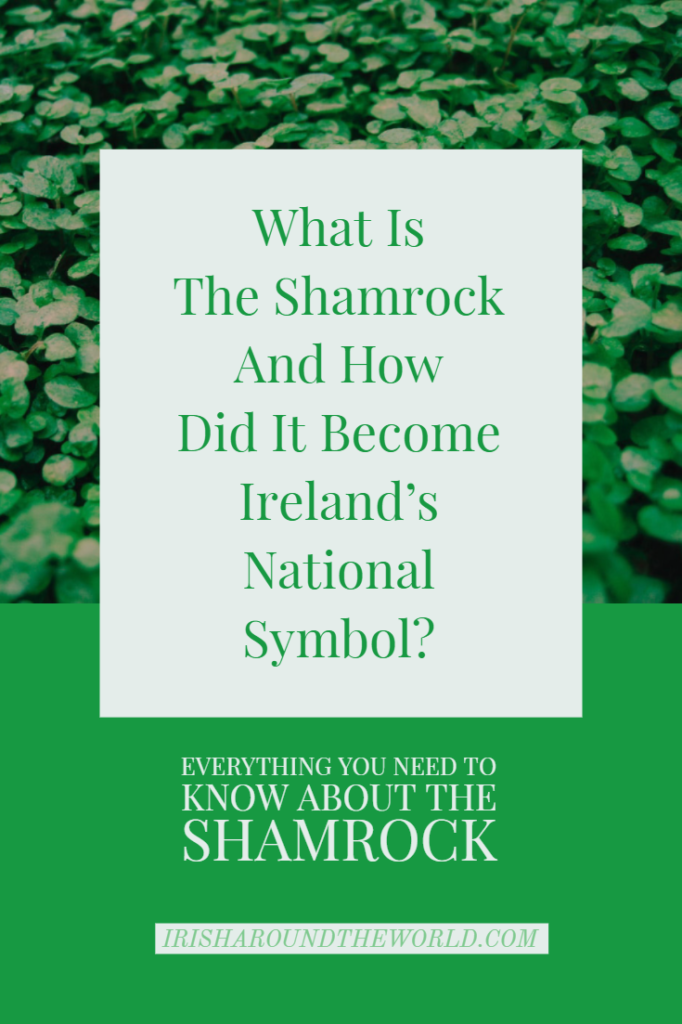 It is said that the true plant can be grown only in Ireland or on Irish soil. This myth owes more to marketing wizardry than to any horticultural truth. Although we are not going to argue with it 😉

Thanks for stopping by, and be sure to get your weekly dose of Irish straight to your inbox right here!

Well I have them in my aloe Vera plant and I never planted any seeds with my Aloe Vera plant.It's in a pot.I have the 3 and the 4.Shamrock and Clover but also close to my water hose in the back yard and I mean plenty of them.

My daughter finds 4 leaf clovers all the time ... so we press them with and Irish saying and make a book mark and give them away 🍀

I have an odd talent (if you can call it that) - I can easily find four- leaf clovers. Even as a child, I would amaze my parents by bringing them in from the yard or the park. I just have over 100 that I’ve pressed in books! Apparently my great aunt could do the same thing... maybe it’s my Irish ancestry? They are very fun to find.

I have been looking for a four leaf clover all my life. I am 46 yrs old and still have not found one. The search continues...

I am sure one day you will find one Danny! Hope you do :)

Each year I purchase a shamrock plant at my grocery store. Ironically, it is called the "oxalis weed," and weed control chemical manufacturers seek to destroy it. The hearty plant sprouts delicate white flowers and continues to bless my lawn!